Where does this persistent optimism come from anyway? It’s not like I’m bolstered by past successes. I’m not even an unnaturally upbeat kinda chick. Yet there we went into the backyard all confident – the pup, the big goober dog and me – accompanied by the Canon and two sets of reindeer antlers.

Gonna get me some cute holiday photos for the CCI card exchange, said that child’s voice of naivete inside my head. Oh yeah, this will be so awesome.

And if awesome involves repeated lamentations of aargh! quit knocking them off! then yeah, we got yer awesome right here.

Because if one wasn’t shaking the antler things off his or her own noggin, he or she was pulling them off the other’s.  Then Euka would take off in a full gallop of puppy happiness with the merry sound of jingle bells coming from the head boppers in her mouth.

Oh sure, I expected this. It’s not like this is the first time I’ve put head boppers on a dog, you know. But I really want this to work out so I can get those holiday shots.

I set the antlers on the lawn, then pause to putz around with the camera settings. Then this.

Look closer. Do you see the antlers held oh-so-gently in that puppy maw? The look of daring in those brown eyes? It’s like she knows.

We’ll start with the mighty Micron. He’s been through this fun before, so he’s experienced enough to realize the sooner we get this party started, the sooner he gets the good-boy treat.

But Euka says Incoming! She leaps, Micron blocks. With one meaty, baseball mitt paw, he insists she keep her teeth to herself.

Minutes later, still only one dog is wearing antlers. Micron is savvy enough to recognize that I’m wearing down, which he knows will be followed next by seriously lowered standards. So with a hopeful tip of the head, Micron helps Euka to snatch off those blasted antlers. And she will. Or sever his carotid. Odds are pretty even here.

Alright, that’s it.  Wiping dog spit and mud off the antlers, it’s time to change what I had in mind. No, not defeat. That’s crazy talk. Instead I need to call in for back-up.  What are you doing right now? I ask the Husband. Nothing, right? He sees the look in my eyes, sighs and turns off the lawn mower to follow me back to the dogs.

Ok, I want antlers on both dogs, I explain as if he’s not been through this exercise with me before. And the puppy will be right here in front of Micron. See, like right between his front legs. Exactly like that. And both of them looking at the camera. Here’s a dog cookie. Got it? What? Don’t look at me like that! Ugh, all right, get the puppy in a Sit and put the stupid antlers on her.

No, they’re looking at you and the dog biscuit! Fine. At least turn Euka so her body is facing me. 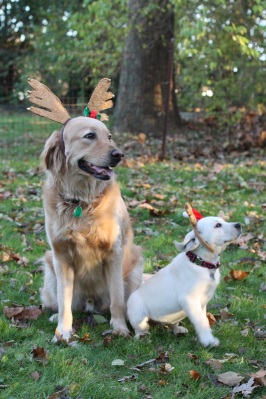 Well, that’s not any better. 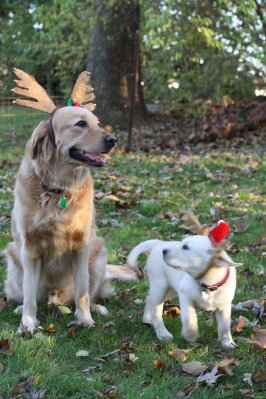 At this point, we’re like a badly choreographed dance. The husband’s moving back and forth to plop the head boppers on a moving dog, then stepping quickly out of the frame. I’m circling the three of them, clicking the shutter with that one last shred of hope hanging by a loose thread to my fragile sanity.

And hey! This one’s kinda cute.

And with my fresh, but healthier, lowered standards we go with that shot. And the Plan B shots of close ups of the two of them individually.

And that’ll do. Dog cookies all around for a job well done. A glass of chilled white for the photographer and her assistant.

Now, where are the Santa hats? Oh, Jager …I got a dog cookie for you …