We’ll be there with bells on 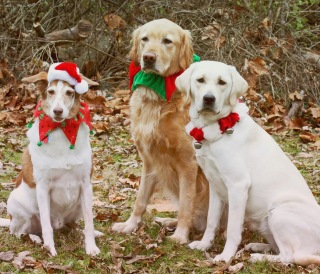 Wait, there it is … do you smell it, too? [sniff sniff snuffle] That peppery mix of decaying fall leaves and impending snow that we Ohioans know so well. Here in the Bermuda Triangle of weird weather patterns we recognize this heady aroma as the harbinger of the Christmas season.

Yeah, we know we should get out there and take care of that last layer of sycamore leaves, but darn it all, it’s just too cold. There’s no glory in leaf raking now that it’s December, so we find some peace of mind in the thought that the snow will cover them up later.  And then when that melts in the spring, it’ll compost those suckers into a nice fertilizing mulch for the new grass awakening from hibernation.

As we wave a tearful good-bye to the oh too short Midwestern autumn, we meet the new winter season poised on the threshold. Not really a hearty welcome for winter around here, though. This contrary season brings on too many low gray skies and chilly winds that rattle the tree limbs like dry bones.

Instead, I’d rather greet this unwelcome guest like a lost traveler who just needs some precise directions to get him to his destination.  I’d invite you in, I say to Winter. But you caught me in the middle of emptying the cat box and you know how that goes. Godspeed to on your journey and all, mister. Hope you make it to Toronto ok. I hear they’re really nice up there.

I leave Winter sitting on my porch steps to look over his map and decide now might be a good time to get some holiday photos of the dogs. At least before this guy realizes that he is indeed in Ohio. Which means we could be seeing some bitter temps anytime before now and February.

As I grab up the holiday props …. antlers, Santa hats, jingly bells, elf cap … I’m on edge and the dogs pick up on it. I feel pressured, you know?  The days are shorter now, the sun’s angle makes long shadows. My window for clean light for photos is rather limited.

Gads, that’s not the only challenge we got here. Here’s my list of lofty expectations …

Oh sure, and don’t forget this one.
First, it’s Jager. But, he says. The sun’s in my eyes.
It’s overcast, I remind him.
Then it’s your Christmas sweater, says Jager. Did you get it on sale, at least? 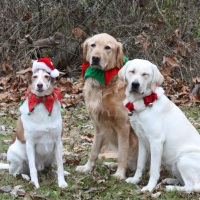 Next it’s Euka with the squinty eye look.

Honestly, she chimes in. There’s a reason some of that stuff is so cheap on Black Friday.

You know what, I say. Actually I get a lot of comments when I wear this. See, Rudolph’s nose lights up when I press his right eyeball.

Right, I say. How ’bout jealous much?

That’s it, says Jager. You just hit it on the blinking nose. I’ll be adding Tasteless Rudolph Sweater to my Christmas list.

I decide to ignore the Duo of Sarcasm and raise the camera for another try.

Aargh, I didn’t see that coming. A diversion tactic, Micron style. This guy is smarter than he lets on.

The big fella makes a break and grabs a maw full of the holiday gear from the pile on the ground.

And runs like his plume tail is aflame and only Euka can put it out.

Jager looks at the yellow dog melee, then back at me, with a hopeful gaze upon his big eyes.

Fine. No matter. I did manage to get a shot of the three of them with all bullet-pointed criteria checked neatly off.

Just one more thing I should have added to the list, I think. It might be nice to get a shot without a dead stick pile looming in the background like an autumnal Armageddon.

Darn this season cross-over with its sans snow dead stick decor. Ohio is in serious need of an exterior decorator.  I’m just gonna have to try this again.

I’ll break it to the dogs tomorrow. And after I find all the holiday props scattered about in the yard.

Because it might snow, you know. Any day now. [fingers drumming]  Oh, Mr. Winter, I call. Whatcha got planned for us this week, good lookin’?