Put your thinking cat on for this one

Ok, so what do these folk have in common?

Oh sure, they’re celebrities, the lot of them. Perhaps some more infamous than beloved. And a few can sing. But not all should (looking at you, Sly). Too easy, though. That’s not it.

Need a hint? I’m guessing that this group of folk is random enough that you just might appreciate a connection, if only a raveled thread holding it together.

I’ll toss you a few bones here. Let me know when it clicks for you.

Got it? I’m betting most of you could hum the theme song by now… It’s time to play the music! It’s time to light the lights… For the rest of you, how about …

Of course, we’re talking The Muppet Show, people. This list of celebs mentioned above were just a few of the guests making an appearance. The Muppet Show premiered back when entertainment on the small screen was a planned event. You caught your favorite shows when the networks felt like showing them and hopefully on one of the four channels your crappy little television could get.

What did we have on the air waves in the 70’s, my Dayton friends? Wasn’t it channels 2, 7, 22 and 45? Sound about right? And that was if you could get your little brother to adjust the foil on the rabbit ears and stand right there.

Television was a privilege back then. If something like a big deal was going to be on, say like the annual airing of the Wizard of Oz, we planned ahead by heating the oil in the dutch oven to make popcorn. (Note to everyone under forty: I’m not kidding. Get this … no microwave ovens.) None of the luxuries of cable or DVR on demand. Good lord, we didn’t even have VHS to record our favorite time wasters.

Is that why this brings up all that nostalgic backwash? You had to remember what you enjoyed. Kinda weird now to think of it that way. No do-overs until rerun season started up.

In 1976, The Muppet Show was new and fun, whimsical and silly. And a ridiculously wholesome way to spend an hour. I do miss it. Yeah, I had the guys buy me the full DVD set for my birthday one year, but after the kid moved out the DVD player thing doesn’t work right anymore. Funny thing, it only works when he visits back home. You understand, right?

I don’t even know which remote to use. Honestly, the kid tried to show me, but when he started using algebra, I had to go back to my Candy Crush game.

So anyway, why do I have y’all road tripping with me down this dirt path off memory lane?

That’s the tip of Holly’s tail. It’s all twisty around and whatnot. But nevermind all that.

It reminds me of something.

Do you see it? 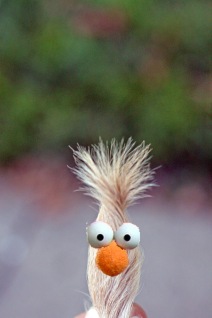 And there he is. The hard luck assistant to Dr. Bunson Honeydew. 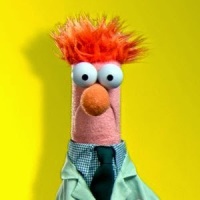 Ok, ok, I know what you’re thinking. I’m way off base here and obviously in need of more sleep or a deep therapy session or something.
And you’re probably right.
Because really, if we looked at this with a cool head we’d all see the truth here.
That tail of Holly’s is just a unibrow away from collecting paperclips.

What about you? I carry a long, yet unrequited, amphibial crush for the green fella, with Gonzo as my fall back guy. Whatever the heck he’s supposed to be. And Grover, with his Monster at the End of this Book, is just genius.