I’m checking email on the laptop when Micron walks into the kitchen, drains the water bowl like a swamp monster and then flomps to the floor. A heavy canine sigh as he looks up at me with those soft brown eyes.

Mikey, my love, I say. You look like you’re carrying the weight of the world upon your withers. Wassup, dude?

She’s hogging the dog bed, he mumbles. All I have is this cold, hard floor [soft whine].

Right, big guy. The cool, smooth floor. Which has always been your first choice. I remind him. I’ve never seen you even sniff that dog bed, never mind lay on it.  And hey, by the way, “she” is has a name. It’s Euka and she’ll be here a while you know. So, Micron honey, fess up. What’s really the problem here?

He closes his eyes and sighs again. She, that Euka dog, keeps biting my Tail of Wondrous Beauty. Well, that and my ears and feet and I don’t know how, but She Euka somehow got my tongue and . . .

I stop typing on the laptop and turn to look at him. Oh, Micron, you’ve been such a tolerant guy these past three weeks. You know what? I’ve been answering the same two questions since Euka showed up here. Everyone wants to know how she’s doing with her training and such. And then folk want to know how you’re adapting with this big change in your life, too.

Really? He lifts his head. The hint of a doggie smile on his face. And you tell them I’m suffering, right? That I’m a martyr for the sake of a shoe eating little carpet stainer? That I must taste like chicken because my tender flesh is being gnawed upon by a She piranha with four legs? How my life’s purpose has been diminished to the bleak tasks of merely eating and sleeping while I await the sunrise just to do it over again? Is that what you tell them?  His tail starts to wag.

Micron, you are such a goober, I say. What I tell everyone is that Euka is doing just wonderful with her training and how she’s actually not eating shoes and staining the carpet. And then I say how well the two of you are getting along now.  You’ve been so very sweet about sharing toys and playing chase in the backyard.  I’m thinking that once this puppy chewing phase has passed, that the two of you will be pretty good pals.

And now that I think about it, I have seen the two of you share that dog bed, too.  I pull up a photo and turn the laptop to show him. See, Euka even scootched her head off to give you room, the little sweet thing.

What!? Micron blinks hard and looks at me. You have got to be kidding me.

Yeah, I’m just yankin’ your chain, I laugh. But c’mon, it is pretty funny. And a little pathetic too, I guess.  But there’s more here. I was able to get some shots of you two playing nicely together.  Look, I think you’ll like these.

See, like this one. The symbolism of kinship. You and Euka are breaking bread together. Get it? Bread?  It’s a gingerbread man! hahaha . . .

Micron looks at me. Uh huh, what else ya got?

. . . hahaha [snort]. Ok, big guy, I continue. Here’s a couple of you two sharing another toy. Well ok, not a toy really. It seems you two have developed an allergy to the plethora of doggie toys I trip over in the kitchen. You’re playing Keep Away with a scrap of newspaper. It was kind of a short lived game. 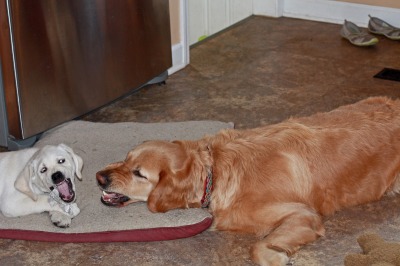 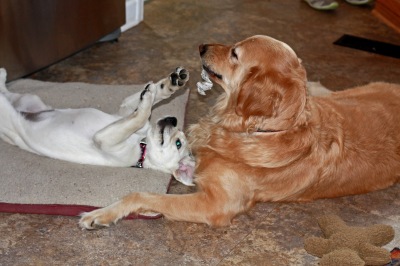 Oh yeah! says Micron. That was a good game. I won, too. She Euka will never get it now. I made sure of that [slurp], guaranteed.

Sure, it all comes out ok in the end, doesn’t it, I say. So to speak. Hey, look at this one. Euka is all airborne coming at you.

So whaddya think now, Mikey? I ask. I rub his head and scratch that magic place behind his ears. Life isn’t really all so bleak now, is it? You still have your Therapy Dog work and now you get to play with a housemate that at least has a sense of humor. Unlike other canine [cough jager] housemates. And folk still care so much about you that they want to know how you’re faring.

And you, Micron my love, have a huge responsibility as a big furry brother to Euka. She needs to learn so much over these next months. And you’re just the guy to be a tutor to this young student.

You’re right! I have like worldly experience and stuff. And here’s exactly where we need to start, says Micron looking at the next photo on the screen. She Euka needs to work on her poker face. Just look at this!  It’s like you asked what we’re up to and I shrug and say ‘nuthin much’.  But the kid has a guilty look on her mug. She totally gives us away. He stands up and looks out into the family room.