Time to go inside! I say, as if she can connect these words with an actual command. C’mon, we have to get to work, kid.

We got us a bit of an attitude problem this week. Holly loves to come to work with me. She just doesn’t like to leave the pet park to do it.

Sure, it’s a nice pet park outside the office, with a good supply of balls and funky smells and mud and stuff, but none of that is on my work plan. Not a deliverable, as we say. On the sweet days of summer a few of us had tested the wireless range only to discover that service at the picnic table was spotty at best. So yep, we’ll definitely have to go inside the building to work.

Right after I collect Holly’s morning deliverables, so to speak.

The otherwise adorable Miss Holly is suffering from a bad case of Ornery Stinkeritis. Also known as the period where volunteer puppy raisers wonder if we can turn these dogs in early to CCI. Holly has become a … teenager.

Ok, at least try to act surprised by this new behavior.

Because I know –we all know — she’s had her moments in the past.

Say like when we first brought her home and all I wanted to do was cuddle with a cotton ball while she was still wee. I’m on my back and pull her up close for a puppy snuggle. Holly snaps her gator teeth onto my bottom lip and proceeds to leave the room.

Is this what Cuddle is? asks Puppy Holly, tail wagging. I like Cuddle. Let’s do Cuddle again.

Go blay wib Jager bor a while, I say through the swelling.

Ok and the time when we found she was systematically plucking the fur from the cat’s back. Using the afore mentioned gator chiclets. And he, the cat, was enjoying it with an enigmatic Hannibal Lector Quid Pro Quo smile, so then we had ourselves two problems.

Oh and what about when she thought a co-worker’s beard was a stuffed animal and just wanted to carry it around for a minute? Like a Jack Russell swinging from a horse tail, that was. First one to let go is a loser, says Holly.

Heck, even when we were watching the newly born Hero Litter on the Eukanuba Livestream, we puppy raisers said whoever gets the pup with a purple collar sure would have their hands full with that one. Then we’d laugh and laugh.

Right. So Holly is high energy pup with the double blessing of being real smart too. And we know what that means.

A puppy who is easily bored.

In this house, we call that Miss Euka, the sequel.

So you see, this ain’t our first rodeo. We know what needs to be done. Ninety percent of the solution will be simply wearing the snot out of her because nobody can deny the wisdom of this.

A tired puppy is a good puppy, we say.

It’s not reasonable to expect this young thing to enjoy the same sedimentary pastimes as someone of my ilk. Which means mostly avoiding situations where I’d have to run, jog or any other event where I would have fewer than one foot on the ground. Thank the Lord for tennis balls.

Last weekend I’m lamenting the latest bouts of the Holly Naughties to a fellow puppy raiser at our CCI Holiday Party.

She’s right, of course. Holly is going through the obligatory teenage phase where Food Lady doesn’t know anything. This is just something to endure while we wait for Holly’s brain to catch up with her body. So with a heavy sigh of acceptance, I join my fellow puppy raisers to watch the Advanced Training demo by a CCI trainer and an AT dog.

That face. Do you see it?

Miss Euka came out to show off her Advanced Training skills to her audience of more than twenty puppies and their volunteer puppy raisers.

Turning off light switches. Picking up and returning her own leash to her handler. Getting a credit card from the floor. Pulling a laundry basket.

And putting herself back into a perfect Heel to get a Good Girl ear scritch. 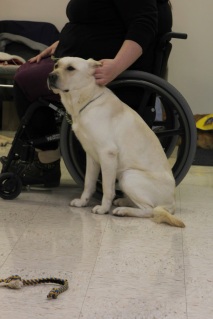 D’ya see this Holly? Look at this.

This is what we’re working for. All this puppy-ness is the stuff of growing up. It’s totally expected and completely normal.

Maturity will come and it will bring awesomeness with it.

In the meantime, we’ve got us some work to do here. And play, too. Because that’s all part of being a puppy.

Puppy-ness goes by faster than one would like. Wish I could bottle this time. 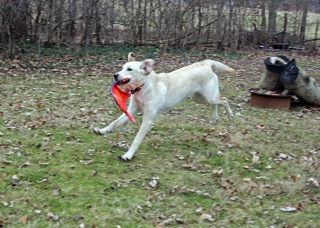