Home › Canine Companions Puppies › Euka II › Where’s the Off switch on this thing?

Where’s the Off switch on this thing?

Girls! I cry. That’ll do for now. Let’s leave the fish tank out of it.  One hundred pounds of wound up yellow dog have t-boned the saltwater tank cabinet bringing about an ominous sploshing sound.

What? says Euka in a tone of innocence that takes quick and dark turn into teenage sass.  It’s not like there’s even a fish in there. Doesn’t that make it just a dirty water tank?

Not even the point, missy, I say. Fourteen gallons of saltwater on the carpet isn’t any less a catastrophe just because it’s missing a flopping clown fish.

Alrighty then. I say. Look, I can see you and Emma have a lot to catch up on. Now that you’ve shown her every toy you have and you two have both performed a full dental exam on each other with your mouth play, well, I continue, let’s go take a walk and burn off that remaining puppy energy.

﻿﻿﻿﻿Littermate Emma was dropped off a couple of hours ago for a play date while her puppy raisers attend a family event. And it’s been Game On ever since with these two. Micron and Jager have positioned themselves on the sofa as spectators of the coliseum event on the carpet below.

Only thing missing from this gladiator battle are dog thumbs to determine the fate of the conquered.

Seems to me like a walk in the metro park will bring a sense of order back to the day.  As we’re getting dog gear together, the two pups are circling around me chanting Park! Park! Park!

I’m already exhausted and we haven’t left yet.

We get Emma and Euka to jump into the backseat of the car and prepare to head out.  As I pull to the end of the driveway, I take a quick glance to make sure they’re behaving. 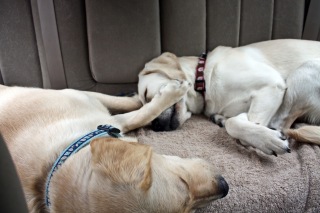 Really?  If I knew a simple car ride could bring such domestic harmony, we would have left a whole lot sooner.

Englewood MetroPark is part of the Five Rivers MetroParks system in our greater Miami Valley area. From their website:

“Englewood MetroPark is one of five natural areas created by the construction of earthen flood control dams. Stillwater River, lakes, woods and wetlands serve as focal points of this 1,900-acre MetroPark.”

It’s rather wonderful to have this natural area so close to home. Merely just down the street and around the corner. When there, I always keep a lookout for a glimpse of one of the nesting Bald Eagles catching the air currents above.  A rare sight which makes it all that much more awesome.

With the recent rains, we decide to keep to the paved walking path this trip. Muddy Dog Alert is Code Yellow and honestly, I’m too tired from this morning to even consider bathing these two today.

This next shot may concern those who know the nature of water dogs. So let me relax those fears to let you know that my favorite kid and photography assistant was at hand with a firm grip on those leashes just out of camera range.  Avoiding mud is one thing, people.  Chauferring two web-toed puppies smelling like river water in the backseat of the Mercury is a whole nuther animal, so to speak.

And holy cow, have you seen the ticks this season? One of the thirty CCI commands to be introduced by puppy raisers is Roll.  Different than Roll Over, this is more like a Roll for Exam.  We ask the pups to roll onto their backs and just relax for a few.  This position of comfort is intended to make the dog more accessible to a person with a disability to handle grooming tasks and such.  A puppy in a Roll position is now available for ear cleaning, a dental check, toenail clipping and under carriage brushing.

Today we use this command for an post-walk tick check on each pup.  Before we even feel about our own noggins for the little buggers, the kid and I are examining the yellow dogs.

I absolutely hate ticks, which is natural I think. But then, I have a serious problem with anything traveling about on eight legs.  Some dark force was involved with this octopedal thing, is my way of looking at it.  Think about it for a sec. Nothing good ever came about with an eight-legged critter. Ticks, spiders, scorpions, mites, even crabs – the spiders of the sea. Ah, but not an octopus, you know. Those are arms, so they’re all good. And I don’t want to hear any of that spittle about spiders being helpful because they eat other insects. Birds eat bugs too and they’re not evil, now are they?

See?  If a sparrow was perched in the corner of your bathroom, you wouldn’t squash it by throwing your husband’s shoe while screaming, right?

Anyway, no malicious parasites to be found on the girls. A blessed relief to not have to put the tweezers to work.  The kid and I came out of it clean too.  Another bonus, as we both still carry the emotional scars from the time I had to tweeze a fully engorged tick from between his big and second toes.

And now I think we’ve finally worn the pups out. They still have an attitude of puppy playfulness, but seem satisfied to lie on their sides and play something like patty cake with their front paws. It’s like there’s no real Off button on a puppy, you’re just to wait until their batteries drain.

Which brings to mind another helpful CCI command.  Euka! Emma! I say, pointing to the dog crate. Girls, Kennel!

Ah, peace. Now some time to charge my batteries, too. Because I think the Round Two bell will be ringing very soon.

Wearing the puppy cape while doing an Up. Impressive enough, maybe. But I think the best part is he held the pose until I got the shot. Smart puppy, this one. #cciNeptune #watchneptunegrow #ccipuppyraising @ccicaninepuppy
The Puppy Situation. Day 17. With the promise of a cookie for Good Dogs, all are willing to make a sacrifice to earn the title. So here they are, in the same room as the puppy. Meanwhile, puppy Neptune is learning that Sit comes with an implied Stay until Released. #theyallgotacookie #cciNeptune #watchneptunegrow @ccicaninepuppy
"Oh, henlo," says Neptune. "I think it's food o'clock now, right?" #ccineptune #ccipuppyraising @ccicaninepuppy @chewy #chewyboxlove @eukanuba
A calm moment to get a shot of that face. And by moment, I mean don't blink, because he's already taken off on another Tigger-bounce with a leaf in his mouth. #adorbs #ccipuppyraising #ccineptune #watchneptunegrow @ccicanine labradorgoldencross